Let’s remove « Having it all » from our vocabulary

She’s a tenured professor at Princeton, well known public speaker, writer… how good is that? She has a husband who carries the family load, two sons, and looks wonderful. I’d really rather she celebrate that life than fret over what she perceives as a major career concession (more later)

Life is about choices

Ms Slaughter’s decision to quit Washington was a choice – and a pretty reasonable one at that, which many men have taken too. She wanted to go home despite her husband looking after house and family. We all have to make choices, men and women. And a choice always means giving up one of the options. C’est la vie, as they say on this side of the pond.

Men can’t have it all either

Men have for years given up precious family time to travel, late meetings, cancelled holidays etc. Many regret it deeply in their later years. We need to recognize that sacrifice, and the fact that many men would dearly love more “balance” too. 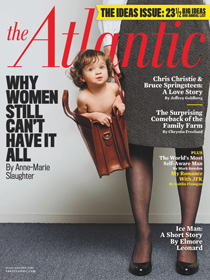 Atlantic’s cover is a scandalous, guilt creating 1970 concentration of stereotypes. It’s really time everyone stopped using these images. I hope Ms Slaughter, who seems a smart and sensible woman, had nothing to do with its choosing. Whoever saw the same image of a man? This kind of journalism panders to the worst conservative sentiments and just helps to make women feel even more guilty

Ms Slaughter is setting the bar way too high, as we women often tend to do

The reason for Ms Slaughter’s despondency is that she had to give up what must be one of the craziest jobs around. Nobody can do that job and be home for dinner time every evening. Some jobs imply difficult choices more than others. We ignore that fact at our peril. Just watch West Wing!

The author’s decision was a victory, not a lost battle

Ms Slaughter is a fantastic role model without the Washington job. I’d say, even a better one than had she stuck it out in Washington. Most women don’t want the crazy lives of the few powerful “role models” the media love to portray. That’s probably the deep down reason for why her article resonates. So why does the article leave us with an impression of her having lost some kind of feminist battle? Or that “work-life balance” really is not possible? I’d rather Ms Slaughter had celebrated her experience rather than leaving us with a sense of infinite regret.

Yet Ms Slaughter’s article has struck a chord because so many women – and men – are trying hard to create a life which encompasses work, love and family (let’s stop talking about work-life balance too, may we?). Dual career couples have been the norm for a generation but the world of work is changing at a snail’s pace. So generation X and Y find themselves stuck in the middle, aspiring for change while their companies hope the “women problem” will sort itself out.

Ms Slaughter’s article does propose paths for change. I agree with all of these and several forward-looking businesses are making progress

Keeping meetings to core time (9 to 6 in many cultures), reducing “presenteeism”, providing paid family leave…the solutions are there but companies need to enforce them strongly to avoid some managers – and bosses – using late meetings as a management technique, a bullying strategy or a competitive weapon. And women need to stop feeling guilty about maternity leave: it’s a right and can be managed proactively to everyone’s benefit.

Technology lets us limit travel, and work when and where we want to. Face to face meetings are still vital, but not all day, every day. I know many women entrepreneurs who dine with their kids and work a couple of hours after dinner. Herminia Ibarra, professor at Insead, has written a refreshing paper on the value of “coming in late, leaving early”. We just need to stick our necks out and ask for it to be possible

Workers, men and women, want to control their time

This is the key issue behind the whole “having it all” syndrome. You can get a lot done in a day if you are left to organize your time in a way that works for you. The 7 pm meeting is not a problem as such: it is only a problem when you learn about it at 6 pm, especially if you feel it is badly prepared and unnecessary! Professors, writers, independent consultants and many others can organize their work as they see best. If companies can’t give men and women more control over their time, they will lose them to other more empowering professions. Young women and men today should think long and hard about how to create control of their time in their years of family responsibilities

Until companies and cultures reach a point where men and women can create balanced lives, we all have to create our own paths through life. So here are a few suggestions for my daughters and their friends.

We can’t all be world leaders or Prix Nobels. It only happens to a few, despite the rousing speeches at Harvard and other Ivy League commencements. Seek out some “normal women” role models, celebrate  the great life you have, or find a way to make it better, on your terms.

Choose your profession and sector – or accept the choices they imply

Some professions, sectors or corporate cultures give more opportunities than others to control one’s own time. And if you really want to work at the White House or L’Elysée, don’t expect to be home for dinner. It’s as clear as that.

Ms Slaughter was trying to combine a tough job with a long commute to home. Professional women need to make living as close as possible to work and the kids school a top priority. For all my child-raising years, I lived within a half kilometer triangle of work, home and school. It meant I was far from shops, movies and other downtown fun, but it made all the difference. My husband, on the other hand, had to commute through Parisian traffic every day. Added to a high powered career and family responsibilities, such a commute rapidly becomes untenable.

You can live the high adrenalin life of some professions at some stages of your life. Nobody can deny the excitement of such jobs, and the money they bring can help you on the way to financial independence. But life is long, and there are always options to change for more control. How many top women lawyers have left their large corporate law firms to found their boutique practice together, covering for each other through their child-bearing years? Other examples abound: it takes deciding what’s really important for you, and taking the plunge.

And I’ll bet that as soon as Ms Slaughter’s sons are off to college, she will be off to Washington again for a great political career, like Madeleine Albright before her.

Stand up for what you want

Women tend to put up with a lot because they feel permanently guilty about work/home/children.

Many “negotiate” an 80% part-time position then end up doing more than their full time colleagues. Better fight for full-time with 20% flex-time. Everyone knows you will put in the work…

Watch out for “burnout”

Reports are beginning to surface on women burning out by 30. They’ve worked hard through their years of study while the boys mastered the art of “just enough”. Take a page from their book and give yourself a break every so often. It’s a marathon, not a sprint.

Continue the fight for progress

We have come a really long way in the last 30 years. Just remember, many of France’s top schools only opened to women in the 70s. Today’s fight is around creating work-place practices which let everyone have a life.

It’s a fight for us all, women and men

Sites of interest we’ve a link to. 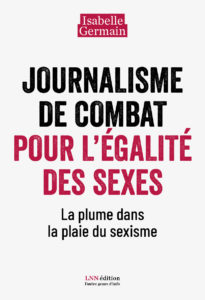 Are you sure want to cancel subscription?